FDMEE 11.1.2.4 has a new skin.  (That’s geek speak for a new visual style.)  With FDMEE 11.1.2.4 you get a slightly cleaner appearance than FDMEE 11.1.2.3.  There’s less shading in various component borders.  (If you’re using or have seen Oracle Planning and Budgeting Cloud Service (PBCS), it has the same look and feel.)

A flatter user interface has been the trend for a couple of years now, as evidenced by the Windows 8 Modern user interface and Apple ditching it’s signature skeuomorphic design elements in iOS and Mac OS.

This important FDM Classic feature makes its way to FDMEE.  Using the Fix Mapping Feature the end user can view and fix mapping errors right from the Validate screen.  (In FDMEE 11.1.2.3, the end user had to leave the Data Load Workbench component and launch the Data Load Mapping component to fix the maps.) 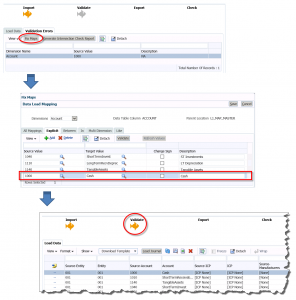 Fix Maps screen is a a handy end user feature, for sure.

Another critical FDM Classic feature finds it’s way to FDMEE – POV locking by location.  By locking a point of view (POV) you can prevent the location from modifying data.  FDMEE 11.1.2.3.520 provided the ability for the FDMEE administrator to lock all locations from the Application Settings component.  With 11.1.2.4, the end user can lock his/her POV at the location level.  Like FDM Classic, the end user even gets the groovy little lock symbol in the POV to indicate that its locked.

Now, with this cool new feature you might be inclined to look for a “Data Synchronization” menu under the Workflow or Setup tab.  Don’t bother; it’s not there.  Using this feature isn’t that obvious but it sure is easy.  You set up an EPM to EPM application data synchronization via Import Formats.  See the following screenshot. 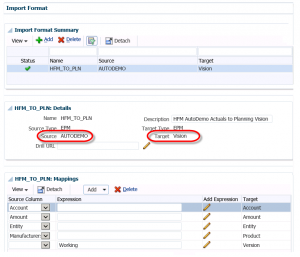 In Oracle EPM 11.1.2.4, FDMEE is the hub for all data syncs between EPM products.

The Excel Interface component also lets you upload metadata elements to FDMEE.  Administrators and consultants alike are going to love this.

The Excel Interface Upload feature can greatly reduce an application rebuild.  For instance, an administrator can export location detail from FDM Classic to Excel and upload it to FDMEE.

Is your company using financial controls (aka, the certification and assessment process) in FDM Classic?  Well, by now you know this functionality now lives in Financial Close Management (FCM).  FCM is used to manage and track all period end close activities.  Oracle EPM 11.1.2.4 brings true integration between FCM and FDMEE.  You can now initiate an FDMEE data load from within FCM.

Based on discussions with the Oracle FDMEE Application Development and Product Management team members, here are a few noteworthy features on the roadmap for FDMEE 11.1.2.4.x.